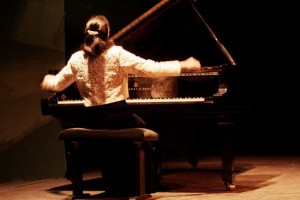 A lot of pianists perform with different parts of their body i.e. involving their head and arms (not to mention their fingers of course…). It is sometimes the case where, a non-musician finds performance with body movement more expressive than the one who sit still like a xoanon. We often see pianist raising their arms above their head. And yet, are those movement or gesture necessary in performing?

It is worth recalling the enormous stress that the Russian drama producer Konstantin Stanislavsky placed on an actor’s ability to free his body of excess tension. The Australian actor Frederick Alexander even developed an educational process that is to recognize the body gesture and habitual movement, which is now known as the ‘Alexander Technique’.

Sadly indeed, extra movement has become a ‘habit’ in 20th century piano performance. One of the most useful ways to eliminate all superfluous gesture is to give full attention on the sound and mentally projecting the sensation of that sound into the tips of their fingers. Achieving perfection and precision of contact with the keys can gradually free the pianist of all unnecessary and excessive movement.

With movement, we should understand that purposeful and useful motion involved in depressing the key, and which is essential in order to produce the musical sound we want. This is distinct from gesture, which we might describe as that part of the motion that is designed to express the performer’s own mood, feeling and emotion. The movement of the pianist’s hand and arm is a highly complex combination of motions, consisting of movements of the fingers, wrist, elbow, forearm and the whole torso. In former times, it was precise and accurate finger movements that were cultivated first and foremost. It was not until Beethoven and the Romantics who came after him introduced new effects in the repertoire such as broader chords, passagework and figuration that required freer and more gliding movements from the pianist. This is not to say of course finger work is unnecessary in those repertoires!

Gesture is something superfluous and usually has a harmful effect on the performance as it is meant to compensate the pianist for shortcomings in his/her own playing. It is also worth bearing in mind that gesture corresponds to something that cannot actually be heard. However, if the gesture really does correspond to the music they play and if the gesture truthfully and graphically reflects the pianist’s own feelings, then such expressive movement cannot be absent.

Frequently an experienced concertgoer tries to find a seat in the concert hall from where they can easily watch the movement of the pianist’s hands. For such a listener every gesture by the performer, i.e. the expression on his face and his whole appearance, may add something to the interpretation. Yet at the same time another listener may close their eyes so as to concentrate fully on the music and remain alone, as it were, in his own world of sound. Sometimes, a pianist may resort to certain gestures at the start of a performance, as this is very helpful in setting the mood for both, the performer himself and the audience.

When we come to teaching, it is often the case that a teacher has to ‘battle’ with a gifted student’s tendency to over-expressive gesture. But just as often they finds themselves having to free students up from excessive constraint, cramped muscles and unwanted tension or stiffness of the wrist, elbow or shoulder. These are frequently the consequence of incorrect training of the hand or sometimes the result of mistaken theoretical view. (Alexander Technique is a very good way in getting rid of the stiffness; and swimming is also considered as an effective way too!)

We might perhaps, divide all pianists into two categories: those who do their best to avoid superfluous gesticulation and confine themselves only to the most efficacious movements, and those who regularly perform with decorative and demonstrative gestures, trying to express the aesthetic experience graphically via certain additional movements. As many theoretical considerations may prompt us to the first category, but we cannot deny that many virtuoso pianists have regularly resorted to a great variety of superficially expressive gestures.